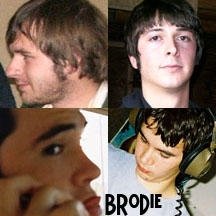 Brodie began in high school, as so many musical projects do. The line-up consisted of Kody Yardley, Kasey Yardley, Kellen Jones, and Matt Humes. A great many songs were written and a few demos recorded. They didn't play very many shows, probably only 10 or 15 in all, and after high school Brodie would never again play in this incarnation.

Some time after the new millenium dawned, Kody began playing songs with Anthony LaGuardia, and harmonious masterpieces were formed. Kody and Anthony wrote an all-new lineup of Brodie songs, which showed a maturity and songwriting savvy far beyond your common high school rock band. They again enlisted the help of Matt on drums and reformed under the same name.

As a three piece, with Matt on drums, Kody on guitar, and Anthony on bass, they played a few shows including the historical South Temple Halloween show (which was eventually shut down by the police due to noise). After some time, they decided they needed to add another dimension of sound to their band. When they asked Matt's brother Charles Humes to join the band and play keyboards, he happily accepted. After a few weeks of jamming acoustic at Charles' apartment (where a lot of alcohol was often consumed in excess), they played the'r first show as a quartet at Silverstres' Cafe. The show was a moderate success and they played Silverstres' many more times thereafter.

They began a very prolific period of songwriting, Brodie's song catalogue was getting pretty thick, so they decided to make a record. In 2002-2003 they began recording tracks for the album which would become Bodhisattva, You Create. Altough initially, it had not seen much sucess, over the years a growing number of people have come to appreciate the one record Brodie made.

There have been rumors of a reunion show, and possibly another record, but as of yet no official plans have been made.

Retrieved from "https://thecollectiveintelligence.fandom.com/wiki/Brodie?oldid=4212"
Community content is available under CC-BY-SA unless otherwise noted.